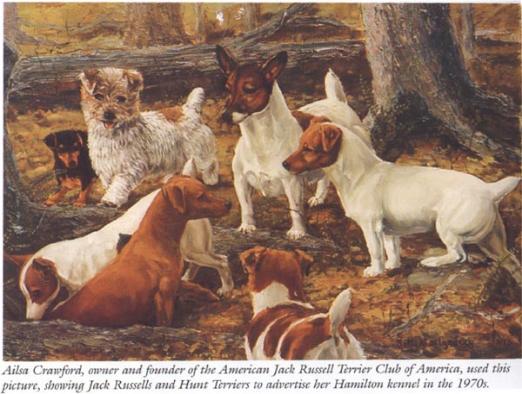 An English Jack Russell is a small, sturdy, balanced terrier that is slightly longer than the length of their legs. They have been bred for hunting anything from rats to badgers since the early 1800’s. The English Jack Russell Terrier has survived because of the dedication of the people who own them. Breeders took up the challenge to create a short terrier, with the purpose to be able to go in the ground and bolt the varmints the quarry.

The scene in England in the 1800’s was very civilized, dominated by an intelligent, wealthy and bored upper class… very much inclined to any kind of sport. While still a very “rural” society by modern standards, the science of selective breeding is well advanced (more milk, more meat, and more kernels on the cob and grains on the shaft). Meanwhile, across the country, foxes are eating chickens, eggs, and rabbits by the score. And rats are decimating the stores of grain and corn meant for wealth-producing livestock (not to mention the more personal damage to the cook’s stocks of cheese and bread).

Like mad scientists in the laboratory, terrier men across England began to mix “a little of this” with “a little of that” to create the working dog they needed. Probably starting with the old Fox Terrier, then adding Beagle, Hound, Bedlington Terrier, Border Terrier, Bull Terrier, Cairn Terrier, Dachshund, Lakeland Terrier, pre war, old style Sealyham Terrier, West Highland White Terrier, and who knows what else, they experimented and refined, always with the firm focus on performance in the hunt.

The English Jack Russell Terriers have appeared in literature and prints dating back hundreds of years. Their size has made them superior earth dogs. They were not only used to go to ground, but also to keep the rodent population down on farms and to help eradicate the Bubonic Plague in England.

The English Jack Russell Terrier is very intelligent. They learn what buttons to push, and push they will. They make great pets but they also need discipline and plenty of exercise. Owning an English Jack is like having a big dog in a small body, or a two-year-old child even in their old age. They prefer to be with you 24/7. They love to sleep with you, hunt with you, ride in the truck with you, work with you, laugh with you and cry with you because they seem to have so much intelligence they know when you are down and want to be by your side.

The Quorn is the largest hunt in England. Prince Charles hunts his terriers at the Quorn where the terrier man as they are called, sets on his horse. When the fox is located the terrier is put down the hole to bring fox up, so the ride can began.